When my son was hospitalized in a residential facility several years ago, I was devastated. When even the staff of the residential facility didn’t know what to do to help him, I started to try to figure things out on my own. One of the practices that helped us both was something I learned from today’s book recommendation: Devotion: A Memoir by Dani Shapiro. 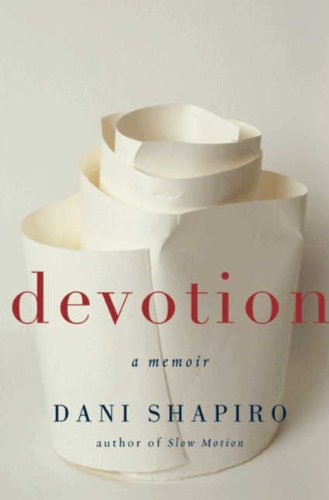 I learned a lot from this book, mostly to just accept where I was at, and that there wasn’t just ONE way to be spiritual. It was okay to collect what worked for me from many different practices, and develop my own spiritual practice. But, what I learned from this book that had the most profound impact on my son and me was the Metta meditation which Shapiro discusses on page 36.

At the time that I found this book, my son had a hard time processing conversations. At the age of 18 months, he had lost his ability to walk, talk, and most other basic functions. He eventually gained back speech, but it had begun as echolalia, and then progressed from there. However, even though he had gained back his speech fully by the time he went into the residential facility (oftentimes being described as the “little professor” because of his adult-like speech), he still had difficulty processing and understanding what others were saying. In addition, he had an acute need for repetition which had presented itself as a severe form of OCD.

I believe it was these aspects of him, as well as my wholehearted belief that even though I couldn’t change nature, I could certainly pour on as much positive nurture as possible, that made the Metta mediation process stand out to me. So, I created a personalized Metta prayer from several different sources and read it to him every night on the telephone when he was in the hospital and every night before he went to bed when he was home for visits. By the time he was released, we had both memorized it, and repeated it often when we felt any kind of anxiety or sense of being out of control. I still have one of the handwritten copies I had made and keep it in my purse where it can easily be accessed.

May I be safe.

May I be happy.

May I be strong.

May I be filled with love.

May I live with ease.

May I slow down and be more present.

May my heart be open to all that is.

May I have clarity of thought.

May I have clarity of speech.

May I have clarity of action.

This made a huge difference in our lives, and shortly after, my son began to write his own positive affirmations on post-it notes and post them all over the house to help him remember to be positive even though everything in his mind was telling him to be otherwise. I believe this practice is part of why he has not been hospitalized in the past six years.

A quick note: At the time I first read Devotion, I wrote a review on my other blog. If you’d like to know more about the book, you can read my thoughts here.